The South London suburb of Penge may not be known for its football heritage, but it was where the first Crystal Palace FC played their home games for two seasons.

Located just a short walk from Crystal Palace Park, a field behind the historic Crooked Billet pub was the ground for Palace’s matches from 1864 to 1866.

The hostelry has a history of a coaching inn going back to 1601, was rebuilt in 1840 and again after being damaged during the Second World War.

Palace would have probably got changed here and enjoyed a post-match luncheon with the visiting team.

The landlady at the time was a widower, Mrs Maria Matthew, who ran the pub for more than a decade.

Not everybody enjoyed the hospitality as a November 1865 match report between the Wanderers and Westminster School reveals, “leaving the damp, unwholesome neighbourhood of Penge… (the Wanderers) flitted away like swallows… until they settled on the more congenial ground at Vincent Square.”

The Sporting Life reported the surface was in a poor condition for the visit of Barnes in a 15-a-side game against Palace in February 1865, with both sets of players caked in mud. “The ground was in a dreadful state, being almost under water,” it said.

Palace recorded just one victory at the venue, which had a sloping pitch – a 2-1 win over Clapham, with captain James Turner providing the winning goal.

It’s not surprising that some of the CPFC 1861 players resided in Penge and they may have wished the side had not left their Billet Field headquarters.

Douglas Allport, who made the most appearances and was the backbone of the club for 14 years, lived just a throw-in away at Queen Adelaide Road.

William Cloete, a well-known breeder of horses and major land and mine owner in Mexico, was also close by.

George Fleet was another Penge native, who became a famous singer, actor and comedian, known by the stage name Rutland Barrington.

His brother, Henry, in his autobiography describes Penge in the 1860s as “a small place… perhaps twenty houses… at the bottom of our fields ran a small brook which constituted the boundary between Surrey and Kent. Here we led a happy country life, our own dairy, a pony for the boys… and a smart cob for the mistress to drive.” 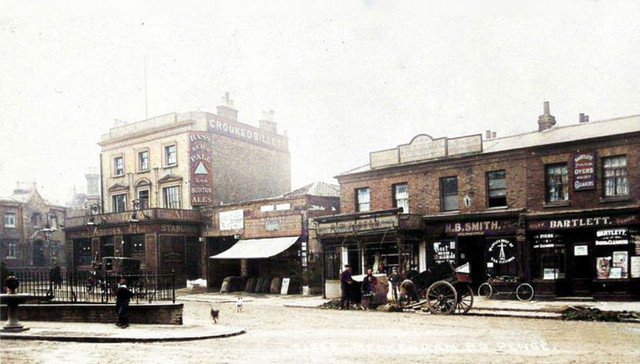 The construction of housing in Billet Field is the likely reason why the team could no longer play on the site as a later map of the area shows the grid of new roads.

Without a home pitch, the first Crystal Palace FC played just three times over 1866/67 with these fixtures taking place at Reigate, twice, and Walthamstow.

In December 1867, The Field reported the club almost disbanded due to having nowhere to play.

“This old-established club, which last year appeared likely to become extinct, in consequence of the loss of their ground at Penge, and the seeming impossibility of obtaining another to suit them, has this year made a fresh start.”

An autonomous club without a fixed abode goes against the unfounded claim that the Crystal Palace Company (CPC) – who would later help form the 1905 CPFC – controlled the Victorian team.

In 2020 his claim was debunked by a group of football historians. Another fan has suggested that the directors of the CPC formed the 1861 club, but provides no evidence.

It is implausible that this would be the case. In the 1860s the CPC was the equivalent of a multi-million pound company of today.

Its workforce would be managing the two million visitors a year that came to the Crystal Palace. The directors would have no interest in promoting an obscure embryonic sport that had no standard rules and no governing sporting body. The Football Association was not set up until 1863.

As R G Graham, the FA secretary from 1868 to 1870 said in relation to football in 1863: “Several clubs existed then, but their matches were of no public interest, owing to the divergence of rules, each having its own ‘Laws of the game’.”

There are just three CPFC 1861 matches recorded at Crystal Palace Park during the first seven years of their existence. Or put another way, they played in the park on a regular basis for only six out of their 15-year history.

In reality the first CPFC would have hired the park’s cricket ground for their fixtures either from the CPC, or perhaps in the early days under a sub-letting arrangement with Crystal Palace Cricket Club. 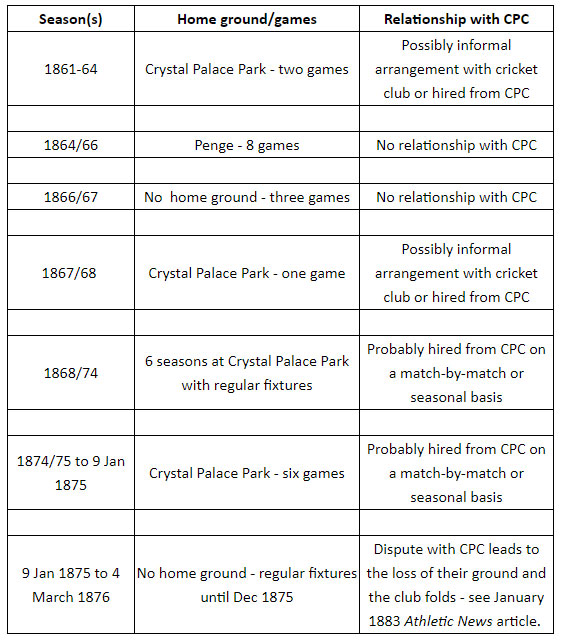 In January 1883, the Athletic News wrote that the club folded, as they were unable to agree terms with the CPC over their pitch.

It said: “The old Crystal Palace Club, which, in its day, was one of the strongest metropolitan societies, but eventually came to grief owing to a misunderstanding with the Palace authorities about their ground.”

Palace held end-of-season suppers at the Clarendon Hotel, in Anerley, but this no longer exists as it was bombed and destroyed during the Second World War.

The CPFC 1861 players also celebrated at the nearby Thicket Hotel, which has since been converted into flats.

The Crooked Billet retains its Victorian hall to the rear, fronting onto Penge Lane and is still popular among locals today.

If you are in the area then it would be fitting to raise a toast to the first Crystal Palace FC (1861-76). By helping found the Football Association, they laid the foundations for the game today.

*If you have any further information about the pub or people involved with the first CPFC, get in touch at editor@holmesdale.net

Further reading on the original CPFC